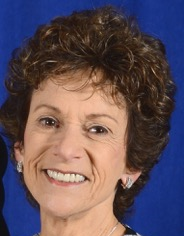 Anita Gomez-Palacio, President Emeritus “par excellence” of the academy is a visionary individual with many years in public education and continues to promote the interests of urban education of public schools, colleges, and universities.

Anita began her teaching career as a French and Spanish teacher in the N.Y.C. high schools for six years followed by a ten-year career in Europe. Upon her return from Europe, Anita was awarded three consecutive Title VII scholarships and able to attend Teacher’s College, Columbia University receiving both an MA in Bilingual Education and TESOL, an ED.M in Instructional Technology, followed by a PD in administration and supervision from St. John’s University. After teaching and A.P. experience in District 25, she was appointed to the position of Principal of Marie Curie Middle School in District 26, Queens.

In 2001 Anita moved from her position as Principal to that of Executive Director of Operations at the Council of School Supervisors and Administrations (CSA). She is particularly proud that at CSA she served the supervisors and administrators who in turn continue to positively affect the lives of so many children.

Although retired in 2013, Anita continues her work with CSA and the many professional associations which have benefited from her participation and leadership. She is currently a member of the Board of Governors of St. John’s University. Executive Board member of the Labor Council for Latin American Advancement (LCLAA); Board Member and Past President of the New York Academy of Public Education (NYAPE); Board Member and Past President of the St. John’s University Chapter of Phi Delta Kappa (PDK); former member of the Executive Board of the NYC Middle School Principles’ Association and many more.

Anita, a child of immigrant parents, is a role model and inspiration for many students in her many accomplishments as educator in the NYC Public School and at the university level. Anita believes that the quality of education, that stresses both academic and ethical standards of the highest degree, has served her well and credits St. John’s with much of the success she has had in her career.

In her personal life, Anita is a very proud parent and grandparent, inspired by her son, Armando and her daughter, Ariana.

How very proud, honored and grateful NYAPE members can be in applauding the meritorious contributions to education of Anita Gomez-Palacio.

The Academy in History